Home › Articles › Can any other head of state outstripe Modi? I doubt

Can any other head of state outstripe Modi? I doubt

My Prime Minister is so hilarious, he got his name printed a thousand or more times on his suit so it looks like a stripe to the world, but up close it reads “Narendra Damodardas Modi” .

Do I have a problem….? not really… But I wonder if they wanted something printed on it, why did not anyone suggest things like “Mera Bharat Mahan” or just “Bharat” or plain “India” or “Indian”… even that can be annoying and pissing especially when you call a foreign dignitary….

Just think of yourself walking around with your name as the stripe. I think it is weird…. even for common people like us…. Now head of states… I have heard that rulers in olden days used such gimmicks because they love themselves so so much… The reason many of us won’t do it is because it feels awfully cheap above everything… But hey, being cheap is also a choice….

And I feel people who do these gimmicks are those who are so self immersed in themselves….. It is always them above others… these people try everything to send a message to people… and that is “follow, respect, obey… if not you are doing something wrong so change” 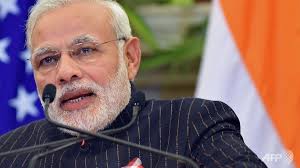 Now did they have the name written in English since Obama was coming…. Now will we see the name stripes in various languages as dignitaries from different countries come….

That being said I am sure Modi would also laugh if he is received by the US president where his striped suit has stripes made of the words “Barrak Obama”…. A joke is a joke… just because Modi in the protagonist it, it does not change…

But we need it accept one fact though; we all love our names printed, be it on books, on the web, on dissertations, conference speaker charts, in company events and anywhere….. the whole social media bandwagon is for people who like feeling important… me, you, everyone….

I even have a blog on my name…. it satisfies my ego that when you search my name on good google the first few results are my name… I love that sense of importance, I also boast about it at times…. I even put my name under some of my FB posts… see how much I love seeing my name… We like it because we can see it….. we can feel it… I think it is human to want your name printed…. Film stars, politicians, celebrities and nobodies like us all love a bit of fame… in the world of selfies it is a normal trend….

But as the head of state if you put your name on the suit as the stripe it is taking that love of fame a bit too far and merging it with the love for the self…. Why should we care…? Because he is the PM of India… if not who the damn bothers if a bearded guy in his sixties likes to wear a shirt printed his name on it… I don’t…. do you…? 🙂

Let us see which head of state can now outstripe Modi

Like Loading...
‹ Favorite Indian Patriotic Songs from the movies of yesteryears
I Think You’re Totally Wrong – A Quarrel ›

As Railroads meet the skies and turn the clouds red #railroad #railroadphotography #railroadtracks
As the Saturday sets you for a night.... :)
With Perumal Murugan....
Speaking at Kozhikode District Jail #kozhikode #kerala