Home › Articles › An Open Letter to Sri Sri about Awards, Malala and Living

An Open Letter to Sri Sri about Awards, Malala and Living 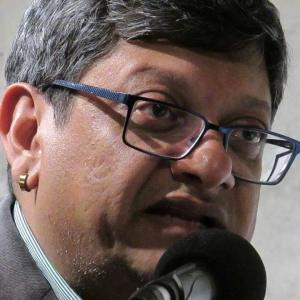 You have a lot of followers whom you have been teaching the Art of Living and I have spoken to many who have attended your programs and they all have good things to tell about it. I have not attended one of yours and so cannot confirm or refute their comments. But I have attended similar sessions before in small are large groups and have been nauseated by the marketing gimmicks in gathering followers as the prime motive over anything else.

What I have seen in my experience is a cult surrounding an individual whom people keep at a pedestal so high and unreachable and unquestionable. But your followers have said you are different, but for me every follower of every guru (whether behind bars or not) says the same and that is why they follow. I think people have the freedom to follow and believe what they want to, just like my freedom to raise my opinion. But may be once when I am able to get over my nausea for such gimmicks I might attend one of your sessions. That being said I know there are humanitarian efforts being performed as part of the foundation which you have established and I think any good deed should be appreciated even if you do not agree with the underlying philosophy.

But this letter is not about what you do with Art of Living, it is about your recent Q&A where you spoke about awards and about Nobel Peace Price winner Malala.

I don’t know which award you refused and if that was refused because it was not as high as the ones above or if it was a badge of dishonor than a badge of honor. Some say it was the Nobel Peace prize, but since it was also given to people like Yasser Arafat, Shimon Peres, and Yitzhak Rabin, I do not wish to comment much here.

Now coming to your answer ‘Aur Kya’ (what else in english) showing agreement to the question asked to you if you feel Malala did not deserve her Nobel Prize, I have a few things to say about that and will also will use your catchy phrase and marketing slogan ‘Art of Living’

The Art of Living as I know is about the techniques you teach people to be in the present. Good for people who have strayed away from the present in search of riches and glory and found themselves in an emptiness in life, I get the drill of why this whole thing gains popularity funds and promotions. There are many people in this world rich and poor who go through physical and mental trauma as part of the challenges in their life. I have been inspired by many people religious and non-religious who have done good work to remove that. Some of them call you Guruji which should then mean you are a person very much always in the present because you preach about it.

Before you agreed to the interviewer’s question on Malala’s worthiness for the award, did you for a moment (being in your present) think the conditions through which Malala had to pass. You might know very well just like I know that in India the struggles some parents go through to push kids to go to school and here is a teenager who was not allowed to go to school for being a girl. She could have been like any other teenager who decided to stay back home and succumb to the tyrants but her dad and her upbringing told her that the right thing to do was to go to school, to pursue education to not stop dreaming. She also became an inspiration to many other kids. We know the aftermath of her decision to defy the tyranny. She was shot, but survived.

My question is did your ‘Art of Living’ Foundation give an award for this brave girl, Sorry if I have missed, I do not follow your newsletters or website regularly. But if not don’t you think that is something every organization should do? Forget about the Nobel Prize, but who else can explain the Art of Living better than the little Malala who fought for the freedom to education in a place, forget ‘Art of Living’ even plain ‘living’ was an impossibility for a little teenage girl.

We all know that all Awards are not made equal, there are awards given for many reasons. But that year when Satyarthi and Malala received it the world applauded because except child abusers against whom satyarthi fought and the tyrants who shot Malala, every single heart in this world felt it was the right pick. If you know, Malala went on to write a book ‘I am Malala’. I hope you have heard about it and even read it. It is a book my 9 year old son keeps next to his bed. And the key thing he got out of reading it was the struggle kids have to face to get an education. What better learning can he get. The knowledge that he gets an education when there are kids around the world who want it but do not get it for many reasons.

People call you Guruji.. Guru means teacher, if you do make a statement (as people call you Guruji) about the irrelevance of an award given to a girl who was nearly shot dead for pursuing ‘learning’ I have no words to say. Just like my 9 year old there are countless kids across the world who have been inspired by Malala. These kids are our future generation unlike people who have lost their peace of mind and tranquility in the pursuit of money and riches and luxury. I am not saying they are not important, all I am saying is Kids are the future.

For me you are the Guru of the people returning back after from the discontentment of their worldly conquests while Malala for me is the embodiment of everything a kid should learn from in their quest to make the future world one of peace and righteousness. May be you were not ‘in the present’ when you said what you said.

I know I will get a lot of hate mails now just like I got (and still get) when I wrote about Asaram Bapu, but then what else can one do if followers of peace chose the path of hatred when questions are asked?

I will end by quoting Sydney J. Harris “The whole purpose of education is to turn mirrors into windows” and we as adults should not paint and taint the windows through which our kids see the world.

Like Loading...
‹ 2016 National Poetry Month Experience
Gandhi’s Grandson in a Old Age Home; But why is it a Big News? ›