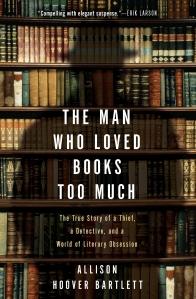 The true story of the prolific book and document thief John Gilkey and his obsession with wanting to own rare books. The Cat and Mouse Chase with the antiquarian bookseller turned detective Ken Sanders. Though we all know that rare books are very valuable we often don’t think of rare book thievery in the same as Art and paintings.

Authored by Allison Hoover Bartlett ‘The Man Who Loved Books Too Much’ is the True Story of a Thief, a Detective, and a World of Literary Obsession. Apart from the book and its narration it is interesting for me on a few other counts. I find it also interesting because it tells you the true story of someone from our times. Gilkey was born in 1968 and his last arrest was in 2010. And it happened in the Bay Area as Gilkey is a resident of Modesto. He was arrested in 2010 in San Francisco. Also I never really knew much of the rare book world and the costs of some of the first edition books.

Allison has spend a lot of time interviewing Gilkey for the book and tells that Gilkey’s obsession with books is also because he felt that a collection of these rare books is a sign of the upper class, that he wants to be part of. Gilkey used the Modern Library’s List of 100 Best Novels as a guide to what items he would steal and he did that through the stolen Credit Cards access to credit card numbers he gained during his employment at SAKs.

His arrest was as part of the sting operation orchestrated by Ken Sanders, who himself was obsessed with the thief coming after his rare book business. Gilkey served 18 months in Jail and then again got arrested in 2010 December

In the end the book is about a Thief who wanted books so much and a Book Dealer who wanted the Thief arrested so bad and a Journalist who wanted the story so much. It is an interesting read for book lovers. It is also my 42nd book in the 50 book Goodreads Challenge for 2017

Like Loading...
‹ The Woman Who Can’t Forget – The Memoir of Jill Price (AJ)
Intimacy by Hanif Kureishi Goodreads 43/50 ›

Tags: Bookreview, Books, Gilkey, The Man Who Loved Books Too Much