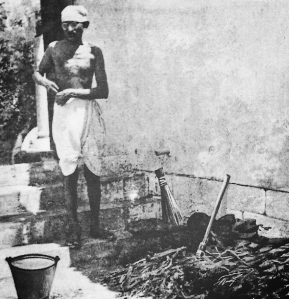 Today marks the 145th birthday of the Father of our Nation Mahatma Gandhi, the man who made ahimsa or nonviolence the weapon in the fight for Indian Independence and inspired leaders like Mandela and MLK in their struggles as well….

Gandhiji was a man who always urged for Cleanliness and probably that is why the new PM of India chose this day to kick off his Clean India Campaign and vows for a clean India for his 150th Birth anniversary….So here are some thoughts to ponder on this day…

Finally the biggest question of all… Am I perfect when I write this… ? no absolutely no…. I have some habits ingrained in me that makes me equally responsible…. to support the effort in India, I will start the change on my end as well….

Bottom line cleanliness is important, but we should ensure it does not come in the expense of India becoming a Hindu state where Hindu nationalists do moral policing and control how people should think and act if they are an Indian citizen…..