The Subtle Art of Not Giving a F*ck 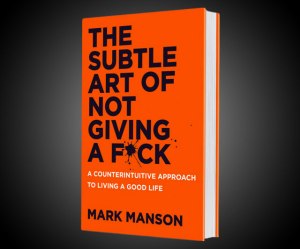 Mark Manson’s book ‘The Subtle Art of Not Giving a F*ck’ was not my first choice to read. But there was so much promotion on it. I saw people posting pictures of it on Social media. People talking.. yes.. people were literally talking about books for a change… And it was displayed in the bookstores (yes… bookstores.. they still have a few of them with brick and mortar around). And then finally my daughter said she wanted to read it. And I said.. what the F*ck.. let’s buy it and got it off Amazon…. online.. just because my local half Book store ran out of it…

In my opinion (though the book claims differently); it is just another self help book. Nothing to lose your mind over if you did not read. But Mark kind of does a good job twisting the self help ‘ten step’ formula model into a more honest tone that has many flavors of the F*ck usages.

I was intrigued to read it when I saw that he starts the book telling us about Charles Bukowski. Bukowski is one of my favorite, who honestly did not give a F*ck to much of anything, like his poem ‘Radio with Guts’.

But after the initial few pages of a Bukowski narrative it starts the usual self help rolls and spins and acrobatics. But the interesting thing is Mark manages to land well on two feet and gets some applause. You will not throw it aside half read, though at times you feel… ‘really..?…. who are you Mark… what do you know about me..”

But that I feel about all these self help books. Especially the loud ones that just go on and on about how great the world is round the corner and all you need to do is take that bend not outside but right inside you.

Well, if there is a magic bullet, people will be having that in their smoothies in the morning and leaving home with a smile pasted both on their face and their ass. But life ain’t that way. It takes a lot of struggle, give and takes and lot of swimming in inconvenient truths, to just get through.

The one good thing I like is that mark strips off the notion that getting up in the morning and looking at the mirror and just saying (repeating) ‘You are awesome’ everyday works.

He tells you that there is sadness and load of rejections in every path. You cannot F*cking have it all and just by pushing the blame on someone for you f*cking up something up is not going to make it any better.

Taking ownership, being responsible and a tiny bit of more mature is a good way to start. The book is a very easy read… relax and read like you watch a movie.

And just because Mark mentioned Bukowski and we are talking about Books, a small piece of info to share, that I read recently. The first recorded instance of the now-common phrase “I don’t give a f*ck” was first seen in the George Tucker 1790 poem ‘The Discontented Student’. that ends as follows

Just so you know I am not against self help books I think they are ok, but don’t depend your lives on them. Books give you perspectives that enable you to think. Even movies do… I mean… give perspectives.

For the records… Nor am I against the word f*ck or the act for that matter… Though like many of us I too prefer the act over the usage of the word..

For me, a single quote can do the work of a self help book. and every time I read it, it just pushes me a bit forward… A quote by none other than Hunter S. Thompson

“Life should not be a journey to the grave with the intention of arriving safely in a pretty and well preserved body, but rather to skid in broadside in a cloud of smoke, thoroughly used up, totally worn out, and loudly proclaiming “Wow! What a Ride!”

Tags: Book Review, Books, The Subtle Art of Not Giving a F*ck