You have no right to Question Radhe maa’s Divinity 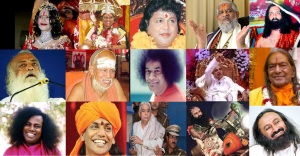 I am confused when people criticize Radhe maa… after all can anyone tell me what is the difference between Radhe Maa and sudhamani. For those who do not know ‘sudhamani’ is the real name of Mata Amirthanandamayi….

In the image here are the pictures of many people all are spiritual leaders in one way or other. All claiming to connect you with the divine. When I say that some will frown; they will say I cannot put them all in the same bucket. That is exactly the point I want to make, who decides who comes in this list and who does not? If you can take one person out of this list then it is quite ok for me to not take out any. So the question comes again

Can anyone tell me what is the difference between Radhe Maa and sudhamani? I am not picking on them, but apparently they are the only females in this male dominated spiritual complex. If you look at the picture both are dressed up in Jewelry and are put on  a pedestal above normal humans and followers of both believe that their God Woman is divine. So what is the difference? Money, power, institution, charity, looks, dress… what is it?

Let us keep aside the differences in terms of money power, jewelry and number of followers and institutions and Charity.. but tell me what is the difference in the sheer quantity of divinity that flows in each of them….. I am hoping you have a mechanism in place to calculate divinity, both the lack of it and the excess of it….

If the question is too personal let us keep God aside for a moment, even though no one has a proof for his/her/its existence I strongly believe that there so many good natured human beings for whom a belief in a supreme being or power above them gives a kind of solace and peace.

Now can someone explain what is it that makes them feel one godman is not a cheat compared to another one or vice versa or what is the difference between the godman/godowman you believe and the Godman/Godwoman you do not believe.

You can always go against a Godman / Godwoman because of a crime they have committed or something illegal they have done. But if you believe in someone for his/her divinity then you cannot say the other one is cheating on the matter of Divinity… can you ? Because you cannot prove either or…

Now is it because she wears miniskirts and allows her followers to kiss her ?…. Why can’t Godwomen be a bit modern…..

The statement “He/She is a fake, but mine is genuine….” is such a farce….. So if you believe in any Godman/Godwoman it is better you shut your hypocrite mouth when it comes to Radhemaa… Radhemaa also has her rights to play the divine card and dupe people who are going to her ready to be duped. There are various levels in which people get cheated and it has nothing to do with education. If you follow one Godman/Godwoman you have no right to look down upon the followers of the other.

I know a lot of people…very good people for whom the possibility of a superior being who looks down upon them and protects them is very important for their well being. I also know a lot of good people who think that most of the stuff spoken about religion is just trash, but they like to believe that there is some unknown power that holds us all together. Not a tab of rights and wrongs but something that is unexplained exists. And I also know a lot of (a much smaller number) good people who don’t believe in any of these. My life and relationship is a result of all these people though as part of the stand I take in my life I go with the third lot. So it is natural that when I say some things some of the good people in the other two groups get offended.

What pisses me off big time is that every single godman/godwoman takes advantage of this innocent belief by good natured people.. the belief that there is a power bigger than them that they can confide in, find solace in. What also pisses me off is that these Godmen/Godwomen have the power to instigate their followers to do just about anything. Some of the people above have been arrested and yet their followership or that of others have not reduced. Because they like believe ‘mine is genuine even if the other is fake’

You have no right to blame Radhemaa on her Divinity. If you blame her, start with your own Godman / Godwoman….