Cashless to CARDFULL and Saffron to SUFFERON – The insensitive Nationalists 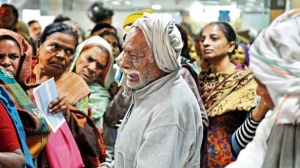 This Hindustan Times photo of an old man crying in a bank in Gurgaon, went viral on Twitter

On Demonetization I have from the start supported it for the anti-corruption element. But what makes me puke is the absolute insensitivity people in the saffron belt show when someone reports the hardships faced by the common man. And many of them can live on with cards and no need for cash. They have been cashless and cardfull for a long.

I recently read a few comments on a friend’s post where nationalists argued that projecting these pictures are sensationalizing a issue that is just another incident. It is so sad hearing that because these are the same people who blame seculars for being biased against the nationalists and call them sickular. The real bias is in their minds because for them anything in the name of nationalism will cut through the basic chord of humanity.

They make statements like “These are temporary issues and do not need to be sensationalized.” and “I had stayed for many years in Bangalore and it was only on rare occasions that I used cash. Even on my last visit a few months ago I rarely had to use cash.”

I have no clue where they come with these ideas. I have lived in India and I have been to Bangalore recently, there are many places I used cash and yes 500 and 1000 rupees. Saying no one needs cash much in india is like ^&SHU$ (I have no real word to use here)

This was such a degrading statement to everyone including the soldiers because just like demonetization you discount the human in the uniform. And that statement reminded me of the ugly selfish moronic patriot who on a train ride was seen arguing with a Jawan (soldier) who was sharing his frustration and sadness on being called to the border without completing his vacation and not having enough time to spend with his new born” Finally we in the train gave our piece of mind to this patriot who was dressed in saffron with Ohm all over his dress. Some idiot who preaches and thinks that the soldiers are all his servants to safeguard his ass and his nationalism.

Standing up for national anthem or applauding when such a rule forces people or saluting the moment you hear the words war and border and soldier does not make you a patriot, it makes you an asshole. Try seeing the person, the human inside the uniform. The soldier who like you and me has a family and has to leave them to work at the border. If you do not see the human being there is no point saluting the Soldier. Your patriotism suck more than your freaking nationalism…. Period…

I agree Demonetization has a positive intent to curb corruption and that is why I wrote asking support for it, But those who support it discounting the hardship people go through is such a sad affair. Calling any voice raised or reporting of hardship as an act of sensationalization and nation comes above citizens is a clear cut picture that Nationalists care less for the grievances of the citizens They just have an orgasmic pleasure of building a stupid identity that means no crap. It is not Saffron My friends it is SUFFERON

Like Loading...
‹ 4 ways to build a human company in the age of machines – Watched the TED Talk and Bought the Book
Reflect, Accept & Correct From professional life to Personal Life ›