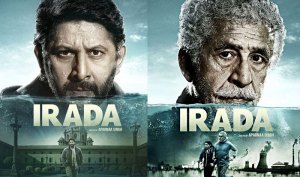 Irada is a new Hindi thriller feature film that released on Feb 17th. Watched it yesterday. The main incentive as always having Naseeruddin in the lead. It also stars Arshad Warsi and I have also liked him in non-comic roles, especially his Sehar in 2005. It is interesting that he never got serious roles after that.

The movie is about eco-terrorism and the impacts of waste and contamination and the fight for the well being of people. A mysterious bomb blast in a factory prompts the state CM (played by Divya Dutta) to hire an NIA officer played by Arshad Warsi. He meets an ex-army man (played by Naseer) who is seeking revenge for his dead daughter and a journalist (Sagarika Ghatge) demanding justice for her slain boyfriend.

Neeraj Pandey’s Wednesday had created such an impact that when ever we see Naseer in a role that deals set in a political cop movie we are reminded of his role in Wednesday. It is unfair to the new movies as Wednesday stands at a special position for movie lovers.

Arshad Warsi I felt was doing a bit of over acting. May be it is tough to be realistic in front of Naseer. I think it is a decent movie, even though not a movie that you might remember for years.

Like Loading...
‹ How Passion and Purpose can together drive Meaningful and Rewarding Professions
Pursuing a passion on the side can make life happier ›