As I complete my 50 Books in 2017 Goodreads Challenge 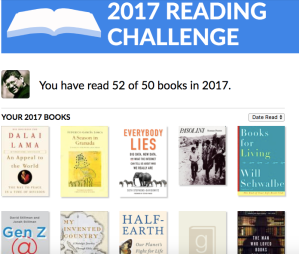 So I finally completed my Goodreads challenge to read 50 books in 2017 two weeks before the end date. And we have two more weeks to go.

Before I give you a list of books I also want to tell you that as a kid I was dead against reading books. I watched TV  day in day out and was in the world of movies and celebrity glitter and never read. When my parents asked me to read, I would read a film magazine, mostly looking pictures and not reading.

But somewhere I guess when I was nearing thirties I started buying books. I found my reading was not like many and I had lost the ability to appreciate many writing. I did not have any touch of enjoying fiction. So most reading has Non Fiction. For fiction and the world classics I read, were not in English, but in their Malayalam translations be it Maxim Gorky, Dostoevsky, Marques or Malayalam writers… So English fiction was never something I got into. This pretty much summarizes what I about to say next.

The other day during a discussion someone spoke of “2001: A Space Odyssey”, I jumped and uttered the name Stanley Kubrick because I always connected it with the movie and never with the book. In fact it did not even strike me that it was a book written by Arthur C. Clarke. I think this has two reasons to it, my complete ignorance of Sci-Fi Books as well as my lack of knowledge of classics and Must Read books.

I know its not a thing of pride, but I think it is very relevant to tell especially when I am writing a post about the 50+ books I read in 2017. The point I am making is that reading 50 books in no way makes me more read than many people who have been reading or read, while they were younger. I can never recover from what I lost ‘not reading’ books in my young age. It also brings me to a point that for 2018 I am probably going to select at least 25 books that I want to read, all books that have become milestones in world literature and I have not read. And I assure you that there are so many classics that I have not read, but the majority of readers and book lovers have.

That said here is the list of the books I read in 2017. I might have a few more to add End of the year, but this is for now.

I did write reviews on some of these books on the blog here, but the interesting thing that happened was last month I also started doing Video Reviews of the books on the Youtube Channel

Will come up with another post with my Challenge for 2018 before the new year.

Like Loading...
‹ Favorite Species – #77 of 365 Poems
On Group Thinking , Free Thinking & Misogyny – How I was removed from a Rationalist Group in Kerala ›

With Perumal Murugan....
Speaking at Kozhikode District Jail #kozhikode #kerala
With students at the College of Engineering in Cherthala #kerala #cherthala #malayalam
@ Manaveeyam in #thiruvananthapuram #kerala