Home › Movies › Papilio Buddha is an important movie for our times

Papilio Buddha is an important movie for our times

Papilio Buddha is a loud shriek that should be carefully and repeatedly heard in one’s own silence in order to connect with your values and sense of humanness …. It is not an easy movie… it is an uncompromising depiction of what is wrong…  the movie boldly rips off the unapologetic masks of our society and looks straight into its hollow eyes and detonates a myriad of questions for people to answer and reflect upon…

Papilio Buddha’s premise is the exploration of the displaced life of a group of Dalits in settlement called Meppara who have embraced Buddhism to escape from caste repression. The movie revolves around three main characters, their connection to the world around and finally in my opinion a well thought out weave to portray them as a single identity. 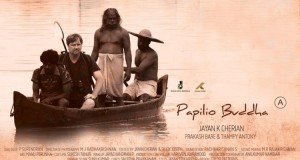 Kandal kariyan (Kallen Pokkudan) a onetime communist party worker who seems to be let down by the party’s inability to bring equality for the indigenous people of the land. He leads a group of protesters involved in a land struggle in the western Ghats. Through this protest the film symbolizes and brings viewer’s attention to many such struggles that happen in various part of India…..

Kariyan’s son Sankaran (Sreekumar) who is educated in JNU but keeps his thoughts outside his father’s line of thought. He assists a white gay American lepidopterist to find the rare Papilio Buddha butterflies and keeps hopes to go to America. He also has a romantic relationship with the American.

And Manjusree (Saritha Sunil) who is both a rickshaw driver and runs a school to teach the children. She struggles trying to live in a mail dominated society taking the brunt of both caste and gender.

It is not an easy movie; it is even more difficult to carry the visuals in your mind and move on…. I think the movie has been extremely successful in showing the images that are forced to exist captive in the shadows of development and shallow progress

As the movie progresses we see Shankaran get arrested and tortured, Manju gang raped by fellow male rickshaw drivers, supporters of the indigenous people doing their part only by holding on to the caste mentality in their mind and finally politics and bureaucracy defining who is right and wrong…. 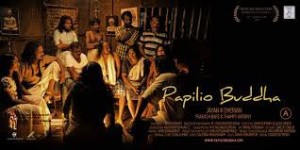 The importance of the movie lies in the fact that it tells a story at a level of gravity that will make people think very hard… Because in India there is a smokescreen that has been there for a very long time.  A smokescreen of protection and caretaking that in turn makes life for the indigenous people often quite unbearable…In the name of equality this smokescreen has in turn created a catastrophic fault line that is becoming more and more evident. This smokescreen is held open by both the protectors and the perpetrators equally in such a way that the victims are often unaware who is who….

I thank Jayan Cherian the director of the movie and its producers Prakash bare and Thambi Antony for believing in and making the movie….

You might find the movie a bit slow at the start, but it is important for the premise to set for those who are unaware of the surrounding….. but I urge you to keep watching as it will fill inside you and sanitize you… It is rated ‘Adults Only’ in India so I will rate it at R so not for kids….

Like Loading...
‹ OK to piss but not OK to Kiss in Public? Indian Moral policing Issues
An Open letter to Subramanian swamy – Your FB post from Nov 2013 ›