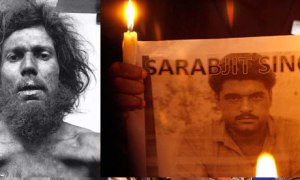 Randeep Hooda has made a stunning makeover for bringing to the Screen the character of Sarabjit Singh. Hope this opens people again to the closed world of common people that national borders shatter. While Randeep Hooda is an actor I love and commend him for his effort, I will dedicate this post to not him and his effort of make over, but to the real Sarabjit Singh and the problem of borders that cut through human lives.

After spending a major part of his life in Pakistan jail he was attacked brutally and had slipped  into an irreversible Coma. Sarabjit’s demise was a sad news not just for indians but for everyone who loves freedom and uphold human rights, and the question remains even today, when will the Governments in countries come out of their long comas.

Being born in a place where countries draw the line of partition, freedom is more abstract than one might think, All over the world people who live in borders face the same impediments to their freedom and way of life.

Be it fishermen or farmers living off land or water, the life is much complex than what Governments are trying to understand. Land and water belongs to the beings inhabiting it, and should not be in control of governments and sectors of power. It is high time that there be an open mind and effort from Governments and officials to take a deeper look into the lives of those living in the borders.

Sarabjit’s case is one that was in the light now and hope it gets more attention with the movie and thanks to Randeep’s effort, I hope the big picture does not go unnoticed. But one can only imagine how many more lives have been sacrificed to mistaken identities of this sort. Common men walking a thin line watching every footstep of theirs to see if it falls in their citizened territory or the neighbour’s. Citizens who are penalized for where they are born and live in the geography rather than where they stand in any political equation…

Sadly we go back centuries into past unwritten and unrecorded history and reach hearsays and even fictitious accounts of our past and then pass judgement on the present and future ahead. But this cannot happen because humanity in its true form is beyond every dogma human’s holds dear be it religion, politics, culture, race. I dedicate this post to everyone who lives in a border where nations decide how people live.

On either side of every border there is a story of the common man, one whose voice is trampled by power or silenced by bullets or boots. People are above borders always should be

Like Loading...
‹ Interesting movie about an aspiring Poet in an ‘Adult World’ :)
The Desert Dancer – A movie for Art and The Freedom to Perform ›