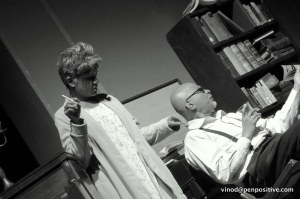 When I read that Naatak was planning to stage August Osage County, I was in two minds because having seen the film adaptation of the same with Meryl Streep as Violet, I was not sure if I could imagine anyone else in that role. While one being a movie and the other on stage I should say Ekta Brahmkshatri Nailed it as Violet.

For those who are not familiar with August: Osage County; It is the 2008 Pulitzer Prize winner for Drama. A dark comic look at the characters in play in a family gathering due to an unexpected event . The collective character temperament though best described as dysfunctional, if carefully look into it can drive you to your own neighborhood 🙂

Why I loved the theme when I first saw it was that we hardly know where the pointer sticks on our own dysfunction meter. I believe we all have one inside us and one neatly staged in our living rooms and an uncalibrated one in our bedrooms that can surprise us anytime any day/night. I have always believed that our own thoughts surprise us most though we fail to often acknowledge it 🙂

The Play was originally written by American Playwright Tracy Letts. The Naatak Play was directed by Mukund Marathe. Naatak as you know is powered by lovers of theatre and it is the result of a whole lot of dedication by a large team who live and breathe theatre. Kudos to them.

Another reason for me going for the show was that I had not seen my friend Rajiv Nema live on stage ever, because the theatre bug hit me many years after I watched Bugaboo (Rajiv will get that joke). Rajiv, I am happy I was there and loved your version of Ewan McGregor’s Bill.

Finally I want to congratulate the entire team for the play and once again to Ekta as she brought on stage not just the life in the character but also stretched that character canvas to accommodate a unique flavor to Violet Weston. Hope to see you more on stage.

The movie was in my list of recommendations before; and for all Bay Area folks this weekend I would put the stage play as your must go show. I believe they have two more shows this Sat and Sunday. Check on their site. http://www.naatak.com/portfolio/august-osage-county-2016/