Home › Book Reviews › Working In The Shadows – A Review

Working In The Shadows – A Review

Gabriel Thompson’s “Working In The Shadows” explores the work life that is hidden behind the glitters of our economy, but contributes to it every equal bit. As a Journalist Gabriel embarks on a one year journey to take up three separate jobs that a typical American will not be ready to take. This was his attempt to work and know first hand what it means to do some of the most hard and often minimum wage jobs in US.

From his home in New York he goes to the Lettuce farms in Yuma and then to a Poultry Factory in Russellville Alabama and then finally back to a restaurant in New York. He works amidst both documented and undocumented workers sharing with them the pains of the work and being one of them. 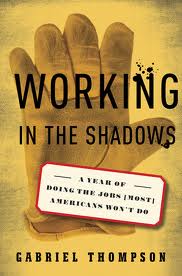 It is the true story of one man who was ready to go there and see it in order to journalize about it. This book is what every one should read, not just to know what the work life is about but also to be thankful for the job they have.

The book also tells you one important aspect of these jobs, the help and support mentality among coworkers. Through out the book you can see that when ever the author is unable to perform the job properly his coworkers help him complete his part of the work though that does not give them any increase in payment or even a tap from the manager, they do it because they consider a coworker on among them. In the cut throat business world often you see office politics taking more time of the employee than the job.

When you buy lettuce for $1 you should know that it only pays 2 cents as wages and even a substantial increase in the wages to the lettuce cutter will be an insignificant increase to you. Based on your Lettuce consumption which for the average american comes to around $322 per year.

We should also we aware that the life expectancy of a farm worker is around 49 years because the pesticides that kill the bugs also effect the man. With consistent ailments such as back pains, swollen feet, fingers and Musculoskeletal Disorder (MSD) there are so many people who continue to work and bring us our necessities or should we say luxuries.

Hats off to Gabriel to embark on this Journey and write about it.