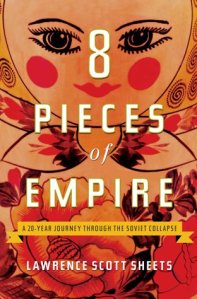 8 pieces of empire is a twenty year journey through the Soviet collapse. Written by Lawrence Scott Sheets who was the National Public Radio NPR’s Moscow bureau chief from 2001 to 2005. The book traces history of the region in the wake of the ten minute December 25th 1991 address that in his opinion made 300 million people ‘the citizens of other countries’ without them really realizing it. As a young correspondent in Soviet Union to being the Caucasus region bureau chief for Reuters from 1992 to 2000 he traces how life transformed for the people.

The subsequent civil unrest that ensued changed the day to day life of people coping with the new realities of the region. The book is a vivid portrayal of life of the people in the region they rose and fell with the tides that was to shape the region in the coming decades  His depiction of many characters he befriended or got acquainted with across his tenure in the region and how many were lost with no trace, sucked into the time holes created by the changing paradigms of politics and border conflicts.

For someone who is interested in getting a journalistic breifing of the times, this would be a worthy read, but at the same time it also holds on to being a terrific narration of the times, neatly wound with characters whose depiction makes you relive the moments with Lawrence

For many history in the region probably stopped on 25th December 1991 and they never ventured deep into what life became there and I think this book is a must read for them, to know how man reacts to change. This is not really the story of a region, but with its mix of culture, ethnic diversity, faith, political ideology and more, it can well be a reflection of how diversity copes with sudden adjustments in life