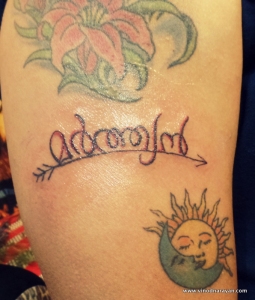 So before the new year starts I got my third Tattoo… ‘മർത്ത്യൻ’ which is a malayalam word and reads ‘Marthyan’. The literal meaning of ‘Marthyan’ is ‘Mortal’ and the antonym being ‘Amarthyan’ or ‘Immortal’. ‘Marthyan’ is also used in malayalam language to suggest ‘Human being’

Why മർത്ത്യൻ?
First ‘മർത്ത്യൻ’ is my pen name when I write in malayalam, my mother tongue; Second I feel that it would be a reminder to people (when I die) that I lived as a human being and do not belong to any religious faction. That I consider being a human being the most (and the only) significant aspect of life. That I was always on the side of the Humanity and not on the side of any religion made to appease gods. That I was not perfect and have felt pride on accepting the shortcomings that made me human. That I did not waste my life on the frivolous acts of worship and superstition. And that I tried my best to put my senses to better understand the world around me.

It is also to tell that I have always been baffled when people pray for heaven, but fear death. When you know that death is the only way you can reach your most awaited and loving heaven, why do people fear death. No, I am not saying I am beyond that fear or that one should look forward for death; None of us like death, we don’t like it for the same reason; It takes away from us the only thing that we are certain about and that is ‘Life’. While none of us want to die we all know it is inevitable, that we have to go one day and we will try everything in our power to stay alive. That is the core of being human, being a mortal, being a Marthyan ‘മർത്ത്യൻ‘, being alive.

A significant number of us (religious or non religious) think that embracing death to achieve heaven or something better is not only foolish, but also irrational, yet many in this world are blinded by the incentive of heaven. I think the acceptance of once own mortality is very important to stop people from doing things that are bad to others; It is important to also believe (and promote) that there is nothing called ‘pardon by God’. The religions promoting that you can be pardoned for your sins by putting your faith in God, or dipping in a sacred river or doing some stupid ritual or going after some self proclaimed godmen or charlatan only increases the wrong doings.

But in this world for some people accepting that they are mortal opens the door to the feeling that there should be some kind of immortality out there, may be a soul, may be something called godliness, may be something that you can latch on to so one can live forever. It is just an imagination (one of the oldest) because we all hate being mortal and being quite helpless about that fact. As the only creatures that know that death exists even when we are not facing it; we are the first Mortals who know we are Mortal. We are all Marthyans……