Home › Articles › What I would have said to Dr. Dawkins if I had more than 2 Minutes

What I would have said to Dr. Dawkins if I had more than 2 Minutes 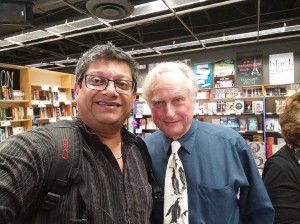 Today Thanks to Kepler Books we got a chance to hear Dr. Richard Dawkins speak, I got to ask a question and then he was also so kind to allow me take a selfie and share a few words with me in a quick 2 minute conversation. Thank You Doctor for that wonderful 2 minutes and the selfie.

When I told you that I blog and do so on the irrationalities and mambo jumbo surrounding Hinduism and you said “Keep up the good work”;  I also understood that if I had more time I could have spoken to you in more detail and also had your opinion on many thoughts that I had and would have taken that encouragement in an even better way.

Hence thought of writing this blog post and if at all at any point you get to read it, you would know what I meant by saying there is much that needs to be opposed outside the Abrahamic realm of things. Thanks again for the time you gave me.

For the benefit of my readers… My question during the event was ‘Why are people hesitant to call themselves an Atheist and always move around it never coming to the point?’ You mentioned that it is important for people to be openly secular and openly atheist and do that realizing how small a minority we are but also take into account that there are more people outside religion and faith than what many would imagine. Thanks for that answer. My take always have been that people don’t call themselves a Atheist in order to not offend the theists. You did answer that also indirectly for another question saying “we should stop being so Damn respectful” But I guess there are many people who live closely on a daily basis with people who help them dearly but would take offence to the word ‘atheist’. This prevents (in my opinion) many people from claiming to be an atheist. I think it is important for people to know that being an atheist is not offensive and people who feel offence do you because of their doubt and lack of proof on their own belief systems. 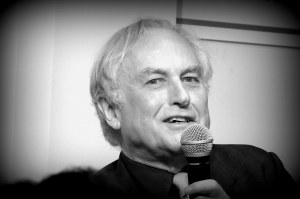 A snap I captured at the event

Here are a few things I would have talked to you if we had more than 2 minutes to chat.

I see that world over the focus of debate is between rationalists and the abrahamic belt. And the same thing is over and over been debated and still the debate continues. But when it comes to hinduism there is very less debate on a global level and this might have to be because of the fact that hinduism is not that wide outside India except for the Indians who have been travelling out and found home outside India. Sadly that is not always the real Indian rationalists. From experience I am a very very minuscule part of the Non resident Indian community…

I feel that it is the repetitive nature of the debate between rationalists and the Abrahamic religious speakers that has given way to discuss the problems of the influence of Abrahamic religions in the world  rather than debating what is wrong. Because when it comes to proof there is much that has been disproved and what cannot be disproved has no proof in itself. So the debates will continue till we find proof for things and give it to these religious folks. In that process many people will question the irrationality in these religions and come out, but always there will be a population of atheists unready to accept.

Hinduism is an entirely different ball game. When you start a debate the first thing they bring up is the name of Charvaka which is the ancient school of Indian Materialism. And the point that gets driven is that we in ancient india accepted all kinds of beliefs and even atheism and Charvaka is an example. So be a hindu and then debate. As an atheist you are still a Hindu.

There is an issue with that argument because there is no coexistence between idol worship, rituals, casteism and atheistic and humanistic views under the same banner or a religion.  When that is argued they would say Hinduism is not a religion it is a way of life. Fair enough on that but what these hindu fundamentalists are doing is make Hinduism a religion or a way of life as pleased when pleased to suit their agenda of pushing for a Hindu Rashtra in India. (A country of Hindus). Their term for Hindus include atheists and followers of abrahamic religions who can trace their ancestral plot to Hindustan

Casteism is one of the big most popular evil of the Hindu religion (way of life) where the upper caste has suppressed the other castes for centuries. Reformers in India and many even within the Hindu religion has over time done everything to try and abolish it and reduce its impact to the society but the hindu fundamentalism meddled with Government for political mileage has made casteism more obvious and ugly than before.

The Hindu politics in India is all about the delusion that something mysteriously sacred has been lost due to the long British and the Mughal rule in India and we should reclaim that and in that big marketing engine what is bubbling up is people connecting with this past through their ugly caste identity. Two days back an old man from a caste considered low in the moronic caste tradition was beaten to death for entering a temple. Temple entrance was a big issue for a long time in India where only the upper caste were allowed and then it changed after several struggles but sadly this mentality is still harboured by people.

Hinduism acts itself to be faceless and formless for many non Indian rationalists and atheists to grasp and debate with unlike the Abrahamic religions where foolishness/irrationality is written in bold letters. In Hinduism it is so much of ritualistic mystery  that you can put many things under the rug into which they have shoved so many important questions over years.

When world over we are trying to separate religion and its influence with Government, India is one place where religion and Government are coupled together calling Hinduism a way of life and not a religion. Now the problem is even the PM of India has made statements like the Elephant god Ganesha is a representation that ancient indians knew about plastic surgery and it was in practice back then. People in high positions have also claimed that mythic stories of flying chariots show ancient Indians knew the technology to fly and most recently they also said that climate change is not real it is we humans who are changing.

The problem with this forced hindu revival on Indian Citizens is that many people who are not irrational in real also go with it because of the massive amount of corruption that existed in the society and this new Government does also have an agenda to reduce corruption . reducing corruption is good but on the side they are pushing these agendas of irrationality into the society and supporting all the fake godmen and God women who have established a multi billion spiritual industry in india that robs people in the pretext of divinity in a human form. This is outside the militant hindu nationalism that took the life of a muslim man over a rumor of eating beef.

There are many courageous minds in India who fight against this irrationality day in and day out and now interestingly they are also being branded anti-national as this irrationality is the true breakfast of the nationalists in India whom the Government supports. The secular fabric of India is being redefined to suit the hindu religious. It is not secularism in the way we understand but the emergence of something they call secular Hindu. That for them is secular and we for them is sickular.

There is a big difference between the Secular Hindu and Secular Human being. The big problem here is that since the majority is Hindu many of the hindus are quite happy and contented with the ‘secular Hindu’ branding instead of being a secular human because they too take it that being a Hindu is not having a religious identity. Even some atheists are are quite comfortable to be told that they are a hindu but follow the charvaka line of thinking. I am not and many are not.

There has also been moves called ‘Ghar Wapsi’ or homecoming where sponsored programs convert christians and muslims back to being Hindu. If Hinduism is a way of life and as they claim a muslim or a christian can live in India even if tradition is this hindu ‘way of life..’ then why this homecoming circus. That question is never answered. reconversion is the aim….

I know my post is not just about religion and reason and rationality but also a bit of politics and that is because very intelligently the Hindu belt has transferred this agenda of religion into a political and nationalistic one and getting all the evils of religion through without naming it as one. A very masterminded effort to make people more superstitious and dependent on religious institutions

Like Loading...
‹ Sicario – Powerful, Intense and Thrilling – Good Watch
The Silence of Modi is Pathetic but that of his supporters is good for the nation ›