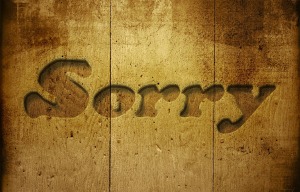 Over several years all over the world people, countries, communities and others have been coming forward and apologizing for the wrong doings that has been committed by not them but people with whom they trace back their roots. It is a very important step for any human being to acknowledge the existence of a past that is wrong and say sorry for it.

One of the biggest long standing ills in the Indian society is the discrimination done as part of the caste system. The caste system that is built by a few to keep themselves in the upper portion of the society while discriminating and stamping the freedom and growth of the remaining. This continued as a norm for a very long time and though there has been reforms, sadly still it remains with many people where they make decisions in life based on what caste they are born to and treat people based on the caste they are born in. They keep names as a tail that tells what their caste is. They only get their kids married to their own caste. Caste is still very ingrained in the mind of many.

I am myself guilty because though I was never really bothered about caste, I also at one time I felt myself part of a caste, caste was a reality that existed around me. I also never objected when many of my friends started calling me by my caste name when in college. And I always let them call it because my rationale probably was that I am secular, I don’t discriminate, so why should I bother. But I was wrong, I was completely wrong….

Any thought of caste in any form is a deranged mindset looking at the history of caste system in India and Kerala where I hail from. I was born into a caste like anyone, but learned it is an evil, but still it did not go away. Initially I had to fake it that I did not have a caste and I had to keep saying it to myself. Even though I did not have it in my name and then it became real that I really did not give a Fuck to which caste I was born in. The only realization is when I see that tail in the name of my relatives and obviously when my old friends call me with that. It is so problematic that even for those who do not like it, it moves with them… so in such a situation doing anything as a caste is in my opinion criminal.

Caste is so glued in people that even if we want to, it takes time to get it off our system. It is understandable that it is not easy to be caste less and apart from striking that from your name you need to apologize if you are from a caste that has done atrocities to others.

Now if I hear a group is specifically on the caste I was born in to I make it a point to stay away. And that is because I do not like it. Caste is poisonous and it will kill the human in you.

What you think is full is empty

Over time now when people call me by my caste name (may be from college memories) I feel a painful burn inside me and the first thing that comes to my mind is the discrimination people from my past would have done in the name of caste. For me that name or any caste name is the symbol of discrimination. The fact is that I like many others have to walk with a burden and it is important to strike off that part of my existence and not let it flow on to the next generation. It is important to ensure that my next generation does not carry that burden and for that one must first apologize. So here I, Vinod Narayan Apologize to everyone for being born to a community which would have potentially discriminated people in the name of caste.

People who join together as a caste say they do so because of reservation and the fact is…. they discount the fact that for centuries they have unleashed atrocities in the name of caste and when now they do not have a reservation they think it is unfair in just a mere 60+ years… You cannot ask for removing reservation without removing the caste mindset from your mind.. period… You do not have a moral right to ask for that…

Until everyone who is born to any community that discriminated people in the name of caste apologizes there will not be a true casteless society. The recent news of a guy who cheated a lot of people in Bangalore by telling them that he would build a Brahmin colony that only houses the brahmins is a clear indication that there are many morons who believe they should live in isolation from other castes.

There is a word in malayalam used very often by people from my community called ‘sambdradayam’. It kind of translates to culture but also encompasses meanings like habits, way of talking, food, rituals etc.. and the argument for many is that it is no more a caste but a ‘sambdradayam’ or culture. While I can understand where that argument is coming from there is a problem with it. If a name denotes a caste you need to get rid of it because you are being identified by that and not the so called ‘sambdradayam’

I know this post might make some of my relatives and people in my community unhappy and I want to let them know, I am not against an individual I am against the usage of a name that denotes a caste and that is not just with the one I was born into but also anyone who wishes to identify with a caste name and also defend being identified as one. I am against that outlook and what I denounce is that ‘sambdradayam’ or culture of being identified with ones caste.

For those who are still not clear let me share with you a post by someone by the name Sunil AS who posted this on a Facebook site called ‘Right Thinkers’ a few months back. And this guy is a right wing Hindu guy. And for those who do not read Malayalam it says that ‘for the world to be a better place people should rape the women born into scheduled castes because they are fourth rate hindus” yes that is exactly what is written.

Every one who identifies themselves with a caste should look at this words and understand the venom that people still harbor in them and without an iota of doubt puke it in public like this. If you are in a community that has discriminated the people in the past based on their caste then it is your duty to apologize. It is not a need, it is an ask, a demand to acknowledge a misdoing and wrong from the past. It is not to clean oneself but to work towards a generation that will look down upon anyone who considers themselves belonging to a caste.

So for records I Vinod Narayan apologize for any wrong doings that the community I was born into would have done in the past that lead to discriminating people based on caste and I assure you I will look down upon anyone who uses their caste as their identity. I don’t have a caste, I never had it in my name and I will be offended if you call me by that name again…

It is important that we fight against the likes of Sunil AS in any caste and for that people who are still peeping out from the windows of their stinking caste houses should come out and demolish that house behind them. You need to be free to live in a free world and that means free from your belief in the caste system and any traces of its shitty remains in you or your coming generations

Like Loading...
‹ The Silence of Modi is Pathetic but that of his supporters is good for the nation
I finally get my sign to start believing in Religion, con artists and Astrologers ›