“Come a Patient Return a Doctor” Really? When does Stupidity turn criminal?

People who through their personal Charisma, stupidity that borders on dishonesty and sweet talk influence unassuming and often less educated people to stop taking medicines and act as crusaders against things like Vaccination should be stopped as they pose a real problem to the society. I have heard some of these people even say that modern medicine is a conspiracy to reduce population.

Here is a video of a guy from Kerala Dr. Joseph Vadakkanchery. (Sorry the image in the thumbnail is not him, but I could not change it as it is video embed). The video is interesting but in Malayalam. And this Joseph dude is a very interesting specimen. He uses the word Doctor (Dr.) but publicly accepts in the video below that he has no medical degree, neither does he have a Phd of sorts to claim a Dr. before his name. He says he is a healer and hence people call him Doctor. Now if someone calls me a Dr. for what ever reason, it is my responsibility to correct them and say as Dr. signifies a lot more and it will be misleading and untrue. I am sure as a reader you will also do the same, but this Joseph dude did not. And my question is why did this guy Joseph dude not do it?. Is it because in his business he had a lot to gain with that 2 letters and a dot?

(The above thumbnail is not that of Joseph Vadakkanchery, please watch the video)

Now he can call himself anything he likes but using Dr. before his name is always with an underlying purpose. Using Dr. in his name and saying he can cure people in my opinion is nothing less than a criminal act. If his name did not have that Dr. before it, would it have helped him to get around his way?. what if his name was QX. Joseph Vadakkanchery? Will he have had the same following or popularity or power of propaganda?… Hell No…

So he himself either started using Dr. before his name or did not stop when people started using it. Both in my opinion can be considered as acts of fraud. So can we say he has been cheating people?. Well I am not the one to say but I know that it is the responsibility of people who know better to help those who fall prey to marketing gimmicks that pass misleading information. For me I feel it is my responsibility to write this blog post. Here is a shot from his webpage which claims he is a Doctor.

And did you see that whole marketing slogan? “Come a Patient Return a Doctor” How more demeaning can it be to Doctors who go through the long years of the needed education to be have the two words and a dot next to their name. 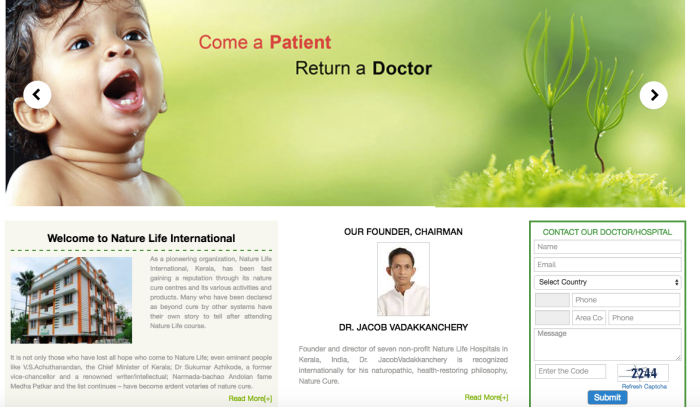 Next question people might ask is Can he practice Naturopathy? Is that legal. Well for that we need to define what ‘Practice’ really means. Now if he covers himself under the mud and do any acrobatics that he wants and as long as we don’t think he is trying to commit suicide or intentionally trying to cause himself harm I think there is nothing illegal. But if he asks people to stop medicine and put them through his untested whims and fancies and call himself a doctor then it is a case of intentionally trying to harm another person. And in that case it does not matter whether he is practicing naturopathy or homeopathy because it is more about practicing antipathy.

He can be a Naturopathic Enthusiast which is all in my opinion what he should be, Not a Doctor with a Dr. before his name. Here are few choices for him FK. QX. QK. NX. NP and many things like this two letter and a dot that he can use but NOT DR. Period….. that would be misleading. I hope the medical world takes notice of this as there is life and well being of people other than this Joseph dude at stake here
-Vinod-