Home › Movies › Mary and Martha – About Malaria, Loss, a Purpose and the Life we Make and Remembering Harry Yirrell

Mary and Martha – About Malaria, Loss, a Purpose and the Life we Make and Remembering Harry Yirrell

Today I watched the movie ‘Mary and Martha’ a 2013 British-American television film starring Hilary Swank and Brenda Blethyn. The film tells the story of two women, two mothers Mary (played by Hilary Swank) and Martha (played by Brenda Blethyn). Mary decides that her 10 year old son George can learn more from the world than from the traditional school and together they travel to Africa so he can see the world and be homeschooled by her. Martha’s son the 21 year old Ben takes up a job in an orphanage in Mozambique.

Both George and Ben die of Malaria and the women meet by chance in Africa as each one travels there to be in the place their kids spent the last moments of their life. The get acquainted and find their life’s mission in creating awareness for Malaria.

As per WHO Increased prevention and control measures have led to a 29% reduction in malaria mortality rates globally since 2010. Sub-Saharan Africa continues to carry a disproportionately high share of the global malaria burden. In 2015, the region was home to 90% of malaria cases and 92% of malaria deaths. 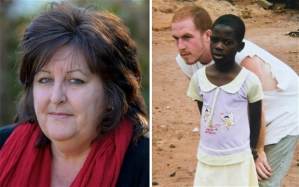 We all know about Malaria but we often do not look at it the way we should. Also may be not being a part of the medical fraternity and the place we live we often do not care for the world around. When I saw the movie I thought I should pen this soon. If it makes a few people read more about the disease and be more aware, so be it.

In the end of the movie there is a scene when Mary and Martha address a team of bureaucrats with the request for  funds towards prevention and cure of the disease and two dialogues by them caught my attention. And I want to share them with you

The movie was produced by Working Title Television, in association with the BBC and NBCUniversal and directed by Phillip Noyce and Based on a screenplay by Richard Curtis.

Like Loading...
‹ Rajkummar is a wonderful actor with an ‘exceptional’ tag to all his roles; Waiting for his Newton
My World of Bookmarks #53 of 365 Poems ›