Kerala Thoughts beyond my Nostalgia 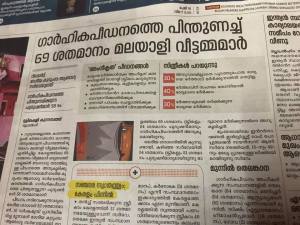 I am returning from Kerala today (1/16/2018), I have been swimming in nostalgia for the past two weeks but before I go I want to share the main news in the paper today…. some thoughts that tore through my nostalgia and flung me into the present reality…..

The news in the Malayalam newspaper is that ‘69% malayali housewives support domestic violence’ the report is from the national family health survey….. this is appalling and sad to say the least…..

When I visited Kerala, apart from my nostalgic encounters I also saw a land where people are now more interested in talking about land price and land ownership.

I left kerala when someone says 2 they meant two thousand; but now when people use 2 they mean 2 crore (which is 20 million) that’s how some people have gotten rich…..

I see huge expensive apartment buildings vacant as the buyers are abroad and no renters or sale happening….. We have to look at opportunity….. beyond land value…..

Progress is same in every society and it is not about land price or number of rich people…. but it is about how we treat ourselves and others in the society….. it’s about equality and equal opportunities and the availability of the same…. it is about understanding the difference between education and knowledge….

I asked people a question ‘other than going abroad, entering government service or profiting from land deals how does someone change their economic status?’ The answer was not immediate…. I am not saying there is no other way…. all I am saying is that these are the three opportunities…. but that is not sufficient for progress…..

Now coming to the news on Domestic violence…. sometimes in our race to get better we might be falling back on the basic essence of humanity….. you would be also amazed that the survey showed that only 58% of men said they supported domestic violence in comparison with the 69% women…. before you blame the women like a wired intellectual specimen you should start thinking of the what makes a woman say so…. this is not about Gender alone but about the patriarch society we live in…. for people who have been so very vehemently opposing feminism and making fun of and trolling women who speak their mind often do not understand the society they live in…..

I know you won’t think this way even if you oppose feminism…. any sane individual would find this disgusting to know this is a survey result….

last survey in Kerala had 66% women and 54% men OK with it….so this time in Kerala more people are OK with domestic violence….

Recently I read a book by Seth Stephens-Davidowitz ‘Everybody Lies: Big Data, New Data, and What the Internet Can Tell Us About Who We Really Are’ and it says that when you type ‘my husband wants’ in google in India the most popular auto fill is ‘my husband wants me to breast feed him’ ….. Yep….. And still people think that feminists in our land talk too much…..

Our society needs a mirror and some silent and some very loud retrospection….